Take one ancient and beloved bird of royal plumage; pluck well. Remove and discard name. Stuff with old chestnuts and brandspeak. Add inept management and one disgruntled union, finely chopped. Pour on scorn of a public tired of silly corporate names; season liberally with financial losses and lay-offs by the thousand. Bring to a simmer and stew gently in intense media glare for about 15 months. Consign entire dish to the garbage when cooked.

Voila! Consignia stew for your delectation.

This unappetizing dish was served up by Britain’s Post Office Group in 2001. What began as an ostensibly routine rebranding of a government-owned enterprise was transformed by a noxious mix of ingredients into what one newspaper called “one of the most disastrous corporate rebrandings ever undertaken”.

Strong words. Were they justified?

The Post Office Group delivered a first class example of the Juliet Syndrome —a name’s power to draw scorn and ridicule and become the focal point of a much wider drama. Like a hare pursued by hounds, Consignia was hunted down and torn to pieces by a voracious media. But, as with the Allegis affair, the Consignia ‘disaster’ was not so much about the pros and cons of a name, although it undoubtedly played its part, as a sorry tale of strategy and communications ineptitude on a grand scale.

The business case for change was plausible enough. Britain’s Post Office Group was the organizational structure for an unwieldy range of related mail and parcel delivery services: there was the Royal Mail, the mail delivery service; Parcelforce, a parcel delivery business; and the post offices, a national network of 17,500 local ‘stores’ where mail is received, sorted, and delivered, stamps are sold, and television and fishing rod licenses are issued along with a ragbag of other services. For many towns in Britain the post office is the hub of the community.

The Post Office Group grew out of a British government institution that dates back to the reign of Charles 1. In 1969 the monstrously cumbersome General Post Office as it was then called was abolished and the assets transferred to two newly created entities — British Telecommunications, handling the phone business, and the Post Office Group.

In 2000, the Post Office Group decided it was time for another change. No longer simply a mail-only organization, the group had become an operationally complex business that had an ambitious eye on international expansion, having already invested £500 million on overseas acquisitions in Europe and North America. The Post Office also provided services such as e-commerce fulfillment, billing and customer management, logistics and warehousing.

As part of a plan to streamline the business and make it more competitive it was decided that the Post Office was to become a state-owned private company on March 26, 2001, allowing management to run it more like a private enterprise.

Ahead of this momentous change the group’s chief executive, John Roberts, announced that the frumpy Post Office Group would be known in future as Consignia PLC. The racy new name was, he said, ‘modern, meaningful and entirely appropriate’ to the evolving organization.

Keith Wells of Dragon Brands, the consultancy appointed to handle the rebranding, chummily explained the logic of the name to the BBC: “We were researching hard into what this organization called the Post Office was facing. What we needed was something that could help pull all the bits together.”

Staying with the Post Office name for the holding company was impossible, he said, given the difficulty in obtaining a global copyright, a necessary step to international expansion.

“That has problems when operating in countries which have their own royal family, or have chopped the heads off their royals,’ said Wells. So Dragon Brands set about creating a new umbrella name for the whole organization that would work internationally, and something that didn’t tie the Post Office Group down to mail.

“It’s got consign in it. It’s got a link with insignia, so there is this kind of royalty-ish thing in the back of one’s mind,’ Wells explained. “And there’s this lovely dictionary definition of consign which is ‘to entrust to the care of’.”

All very nice. Except that the public wasn’t buying the need for change. Not with any name. Specially not Consignia.

The BBC website gave voice to a national outpouring of protest and scorn directed at the name. The timing did not help. The rebranding was meant to usher in a new era of efficiency and international expansion. Instead, the postal services business declined alarmingly. In an attempt to stem spiraling losses, reported to be running at £1.5 billion ($2.16 billion) a year, thousands of postal workers were laid off, and it was newly-minted Consignia delivering the stream of  bad news.

Enter, stage left, a Trades Union Official. William Hayes, who represented 300,000 strike-primed postal workers, cannily played for sympathy by tapping into the entrenched and widespread public dislike of Consignia when he asked employees and the public to boycott the name and use Post Office instead.

”We think the name is daft,” was his official verdict.

By May of 2002 the beleaguered Consignia had a new chairman in Allan Leighton. The situation required action. There was little room for maneuver but he had one political card and he played it on national television. Interviewed by David Frost on the BBC with the Trades Union Official he conceded that the timing of the name introduction was ‘unfortunate’ as it had coincided with a period of underperformance.

Frost pressed him about the name.

David Frost: “And, you’re mentioning there the Consignia point, that re-branding was obviously a disaster and it’s a terrible name — are you going to get rid of?”

Alan Leighton: “We’ve got three very, very, good names to choose from and as you say those names have been round for a long time.”

Consignia was dead. Killed in a moment of television drama for political expediency.

A month later Consignia was finally put out of its misery. Plans for international expansion were shelved and the group was renamed Royal Mail Group plc – one of Frost’s “good old names”. 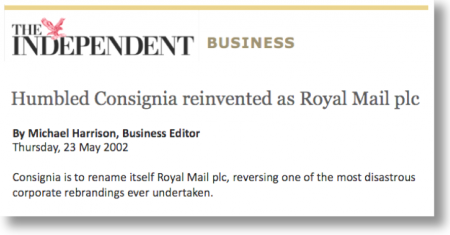 “What we’ve got here is a failure to communicate.”

The line from the movie Cool Hand Luke could serve as an epitaph for Consignia. The logic was that nothing much would change as far as the British public was concerned, the post office name would still remain on thousands of retail branches. Likewise, the Royal Mail will continue to deliver letters — so what’s the point of drawing attention to something that wont affect people?

Keith Wells did acknowledge that confusion arose because the Post Office, in an attempt to save money, refrained from introducing the new name with an advertising campaign to explain the changes.

“We thought ‘what would be the point of advertising if all you would be saying is this name change is happening which is not going to affect you?'”

The failure on all sides to see the potential for public alarm and confusion, political mischief and media scrutiny was the real cause of the Consignia disaster.

Defending a name when political shit hits the media fan, as Wells was left  to do, is futile if no one is willing to defend the overall strategy. In the end, he was shamefully abandoned by his client — they were only too happy to let the name draw most of the opprobrium.

To a point, Dragon Brands delivered what was asked of them. Consignia was vilified because people hated what it stood for – change without explanation, change without engagement. The shadow of uncertainty cast across a cherished and hitherto reassuringly constant pillar of British life was insidious and disturbing. The ‘Post Office’ was changing its name to Consignia. What does it all mean?

That the name Consignia lent itself so readily to ridicule did not help its cause.

It just doesn’t quite come off. It looks plausible enough on paper – there clearly is the base word ‘consign’ but that’s not what you hear. Consignia fails the ear test – it sounds faintly absurd and pretentious, like a parody of those ubiquitous ‘generica’ names for drugs and cars (Corsa, Vectra, Viagra, Avandia, etc., etc.). And, in spite of the dictionary definition of consign, the meaning of that word has shifted in popular parlance: things are euphemistically ‘consigned to the waste bin’ when they fail, or fail to please.

As flawed as the name was, it might have worked with a different strategy. Introducing Consignia first as the name of a new division to handle the corporate and international business, for example, could have given the Post Office Group a chance to stabilize the business as a plc while allowing Consignia to establish itself as a familiar and accepted fact of life as part of the organization. A transition to Consignia at the group name level at a more propitious time would have been smoother and possibly less controversial. A name change has to be linked to success.

The Seven New Laws Of Naming

Rebranding a national institution is not the same as naming a new company. Invoking examples of names such as Google, Apple, Kodak and Orange as justification for Consignia, as Keith Wells did, misses the point by a mile. Those disruptive companies came out of nowhere as virtual start-ups to create their own business category. Over time, their names became synonymous with an industry they created or reinvented. Consignia was significantly different; it was a very public rebranding of a well-established institution.

An immutable law of rebranding a high profile organization is that it is always going to be controversial. You will have to be prepared to overcome entrenched prejudices and allegiances. For a national institution with Royal associations, you can double that.

Rebranding at this level is more about psychology and the politics of change than it is about the intrinsic qualities of a new name. There’s a PR war to be won and it requires constant and proactive communication.

Here are the seven new laws of naming that need to be heeded and followed for corporate naming success:

1. All name changes of any consequence will be controversial. They have to be managed aggressively and proactively.

2. Controversy is good for newspaper circulation figures. There will always be people who don’t like a name change for whatever reason, and reporters will always find them for a quote. Be prepared.

4. Manage expectations about names. New names will always remind people of something else, something more familiar, to begin with. People have to be given a context in which to understand the name.

5. People will get used to new names over time as long as they are free from negative connotations that cannot be overcome (plain dumb names not withstanding).

7. Social media is important. The urls xfinitysucks.com, and xfinitysucks.org are not available. Someone at Comcast is thinking ahead.